Indonesia is the largest archipelagic country in the world, starting from Sabang in Aceh to Merauke in Papua, consisting of thousands of large and small islands, connected by straits and seas. According to a 2010 geographical survey from the Ministry of Home Affairs, the Republic of Indonesia counted 17,504 islands. 7,870 of them have names, while 9,634 are still unnamed.

The total area of Indonesia’s oceans is wider than its land area, Indonesia’s land area is 1.91 million km2, while the ocean area is 6.279 million km2. Such vastness means Indonesia is naturally endowed with a wealth of natural wonders on land and at sea, including of course thousand of kilometres of beautiful sandy tropical beaches lines with palm trees, and a gentle breeze that caresses visitors throughout the year. Among the most famous beaches and renowned worldwide are those of Senggigi in Lombok, Kuta in Bali and Bunaken Beach in Manado (Sulawesi) while many more are yet to be discovered by international tourists

Indonesia’s natural beauty extends beyond its beaches to its mountains, tropical forests, lakes and archaeological sites: from Borobudur, the largest Buddhist structure in the world to Mount Bromo, from Lake Toba on the island of Sumatra, from the famous coloured lakes of Kelimutu on Flores to the natural wonders of Kalimantan and Irian Jaya to the east, they are all great tourist destinations for both local and international travellers that offer wonderful views that can only be experienced in Indonesia. Remarkable Indonesia will welcome you and a smile will accompany you throughout your journey in this beautiful land.

On top of all this, Indonesia also has a rich culture, with various ethnic groups living in harmony and peace side by side, and each one has its own language and traditions and together they create a cultural diversity that is unique to Indonesia, such as is it’s culinary offerings that are specific to each of its regions. You will simply be spoilt for choice: the freshest seafood, an incredible variety of spices, the versatility of coconut, the simplicity of bowl of rice all contribute to make your trip to Indonesia one that is truly remarkable, like Indonesia itself.

The list of destinations in Indonesia is virtually endless, among the most visited is the Komodo National Park home to the Komodo dragon which is to be found only on these islands, nowhere else in the world can its natural habitat be reproduced, and this species is unique in that it simply does not exist outside of Komodo. For adventure seekers and international climbers Carstensz Pyramid is the tallest mountain of Indonesia at almost 5000 meters on the sea level and among the few mountains is covered in perennial snow at tropical latitudes.

Take your pick: relax by the beach, visit astounding archaeological sites, climb volcanoes, take a dip in freshwater lakes, dive in the sea and at the end of every day sit at the table to taste Indonesia. One thing is for certain, you will be spoilt for choice, so you will probably have to come back for more.

3 Interesting Topics For You

1. Rock Jumping Attraction, Nias, North Sumatra
The tourist attraction of the Bawomataluo Tourism Village, Nias, North Sumatra is also quite iconic, namely the stone jump. Referred to as “Hombo Batu” or “Fahombo” in the Nias language, stone jumping was originally a tradition carried out as a condition for youth to take part in war.
However, instead of jumping over ordinary rocks, the Hombo Batu attraction is performed by jumping over a two meter high rock with a width of 40 cm.
When performing the attraction, the youths also wore the traditional clothes of the royal soldiers with the typical colors of Nias; red, yellow and black. If he manages to jump without touching a rock, it means that the young man is considered an adult and physically mature.

2. Karapan Sapi, Madura, East Java
For the Madurese community, Karapan Sapi is not just a cow racing activity in an ordinary traditional ceremony, but to raise the dignity of the Madurese. Therefore, the cows used are not arbitrary. The cows used for karapan cows are given the best massage and food.
During Karapan Sapi, tourists do not only see the “race”. However, you will also see the ritual of cow wine around the racetrack, accompanied by saronen music; Madurese musical instrument. After that, the cow race began.
The cows participating in the karapan will compete on a 180-200 meter long track. The track along it was taken in just 14-18 seconds. 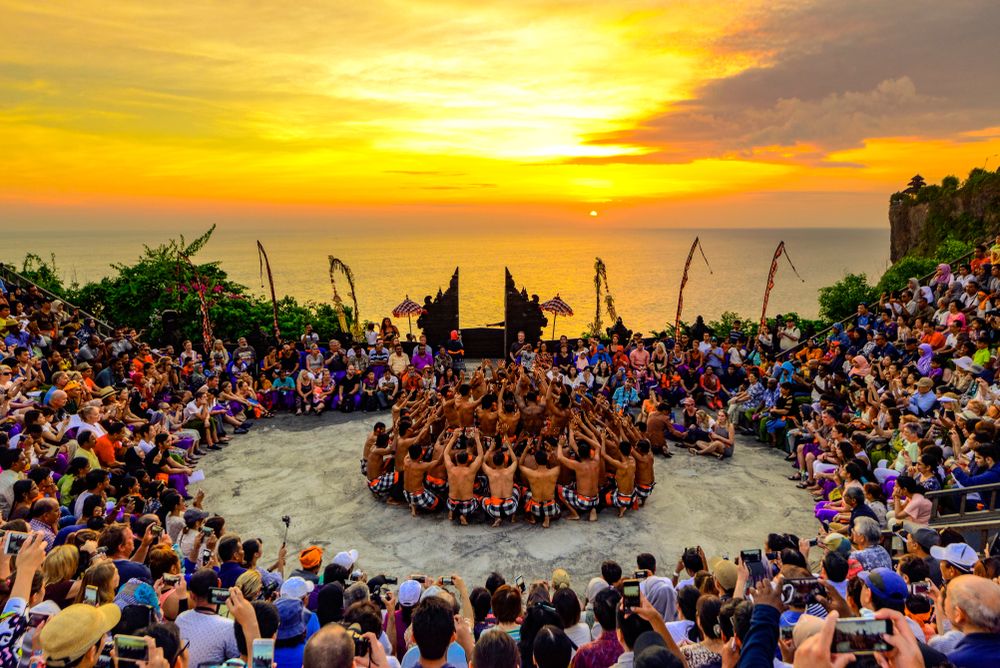 4. Pasola, West Sumba, East Nusa Tenggara
The next iconic tourist attraction is in West Sumba, namely Pasola. Pasola attraction is an attraction from a series of customs related to harvesting and fertility requests.
Pasola usually takes place in a wide expanse of savanna, and is witnessed directly by the villagers. This tourist attraction is quite stressful, because Pasola will invite tourists as if fighting on horseback, and throwing spears at each other.
There is one belief that is quite touching from Pasola’s tourist attractions. When a man or horse falls, the flowing blood can fertilize the soil, and benefit the next harvest.

Raja Ampat, Papua
Raja Ampat was the world’s best diving spot in 2015 according to CNN’s version. Naturally, because Raja Ampat is home to 75% of coral species worldwide. Raja Ampat also has more than 1,318 species of fish, 699 types of mollusks, up to 537 types of coral reefs. It’s an incomparable underwater beauty.

Wakatobi, Southeast Sulawesi
Wakatobi is known as the largest Barrier Reef area in Indonesia. In fact, the beauty of the Wakatobi reef is in second place in the world after the Great Barrier Reef in Australia. Under the Wakatobi sea there are about 942 species of fish and 750 species of coral reefs that we can see very closely. Interestingly, Wakatobi is also a habitat for dolphins, turtles, and whales.

Tulamben Beach, Bali
Tulamben Beach is one of the most beautiful diving spots in Bali, which is the target of domestic and foreign tourists. In addition to marine life that is still very well preserved, we can see beautiful coral reefs while swimming with colorful fish. Not only that, while diving in Tulamben we can also see the wreck of the USS Liberty which has sunk.

Weh Island, Aceh
Pulau Weh spoils us with a large population of delightful and rare sea creatures. Like one of the diving spots in Batee Tokong, which turned out to be a habitat for various kinds of sharks. Then there is the Pantee Peunateung diving spot which holds thousands of beautiful underwater creatures and is home to coral reefs.

Relax and live the slow pace lifestyle of Indonesian villagers, feel the peace and embrace nature. Refresh your soul and regain your creativity.

Lerep Village, Semarang
Located in Semarang Regency, Central Java, Lerep Village is one of the tourist villages that inspires and becomes a tourist destination. It is not surprising that currently Lerep Village has been certified as a sustainable tourism village by the Ministry of Tourism and Creative Economy.
There are many attractions and advantages of the Lerep Tourism Village, one of which is the old school culinary market that presents typical local food. Uniquely, in the old school market, Lerep Village provides healthy snacks using organic ingredients.
In addition, Lerep Village is also developing the concept of environmentally friendly tourism by eliminating plastic packaging. Not to mention the annual tradition: Iriban, which is the main attraction in Lerep Village. 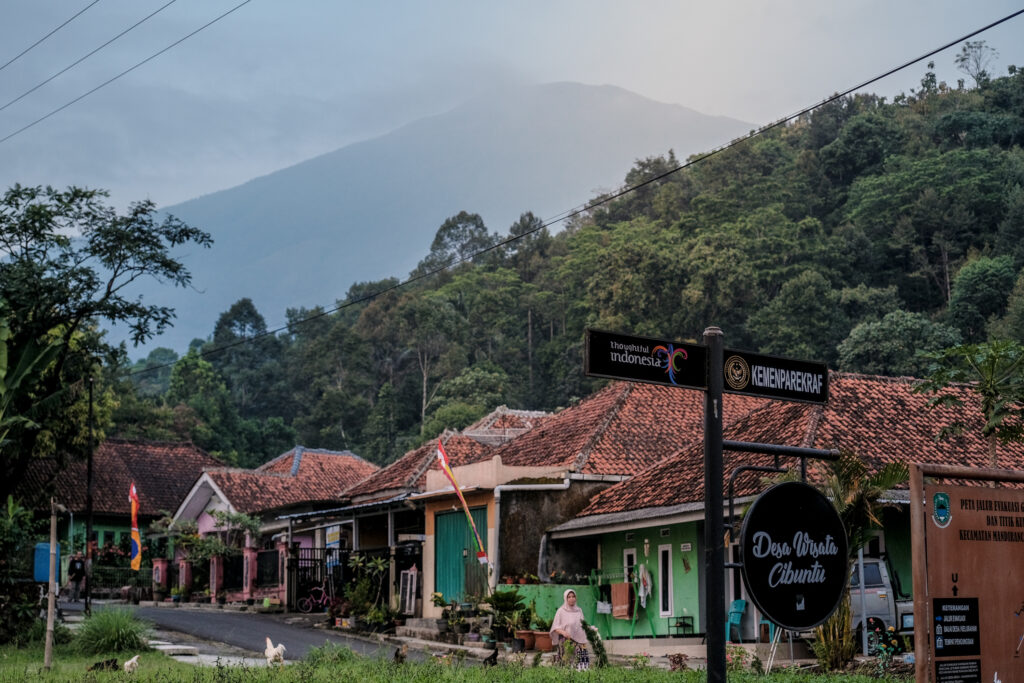 Osing Kemiren Village, Banyuwangi
The next tourist village is Osing Kemiren in Glagah District, Banyuwangi Regency. Interestingly, this village has also received a sustainable tourism village certification from the Ministry of Tourism and Creative Economy and is designated as one of the cultural heritages.
Osing Kemiren village has a very strong culture inhabited by the Osin tribe as a native of Banyuwangi Regency. They have a distinctive tradition that is still carried out today, namely, the Idher Bumi ritual, which aims to ward off disease.
There are arts that are no less interesting than Osing Kemiren village, including: Barong, Kuntulan, Jaran Kincak Mocopatan, and Gandrung. One thing that should not be missed in this tourist village is Osing coffee, Kemiren’s specialty coffee.

Sade Village, Lombok
No less interesting, Sade Village, located in Pujut District, Central Lombok, is included in the category of inspiring tourist village. This is thanks to the great potential it has, ranging from culture, community life, to various creative economy products.
Sade village has about 150 traditional houses with woven bamboo walls, dry grass roofs, and clay floors and rice husks. One of the attractions in Sade Village is the craft of weaving beautiful songket cloth.
Weaving cloth is an obligation for women in Sade Village. If they cannot weave, then women are not allowed to marry even though they are old enough.
No less interesting, there is a kidnapping marriage custom for couples who love each other and plan to get married. This custom is carried out by men who carry away the prospective bride, who is then lodged at the house of her relatives. The next day the man and his family proposed to the girl he was carrying for marriage.